To quote the great Bill Lawry – it’s all happening at the MCG – but unfortunately it’s not going Australia’s way, with a dropped catch and a wasted DRS review inside the first 15 minutes.

Tim Paine appealed for a catch from the very first ball of the morning, feeling that Cheteshwar Pujara had edged Pat Cummins, only for umpire Bruce Oxenford to deny the appeal.

Paine elected to use the DRS, and although there was a tiny spike on Snicko, it appeared to be bat on pad, rather than bat on ball, and Pujara was spared.

“I think that’s the correct decision, I think that tiny little spike came from the bottom of Pujara’s bat clipping his pad, not the ball hitting the bat,” Mike Hussey said on Fox Cricket.

“I think that’s an excellent decision.”

In the very next over Josh Hazlewood found an inside edge from Shubman Gill, and Paine, diving to his left, couldn’t hang on.

The Australian captain got his glove to the ball, but the chance was spilled.

“He got a good piece of it, it seemed to hit right in the middle of that left glove,” Hussey said.

“They’re often the hardest ones for the keeper to take, big deviation but he got a good piece of it, but couldn’t hang on.” 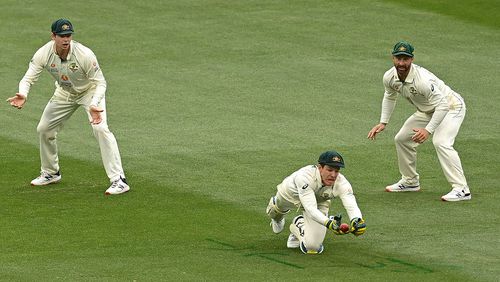 The truck jam at a U.K. port is easing, days after France reopened its border.

By admin
21 mins ago
Sports

For Planet Earth, No Tourism is a Curse and a Blessing