Australia A was later all out for 108 at stumps on the first day of the three-day match at the Sydney Cricket Ground.

Green was subbed out of the match with a concussion, with Patrick Rowe named to replace him for the rest of the game. 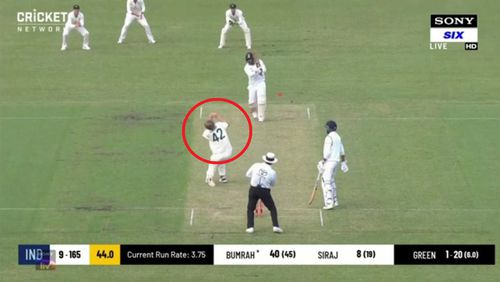 Green was starting the 45th over of the opening innings when Bumrah played a powerful drive back towards the bowler.

The ball hit the right side of Green’s face, sending him to the ground.

Green, who has been cleared of fractures, appeared to be hit on the temple after trying to get his hands to the ball.

“This is Cameron’s first concussion. He has returned to the team hotel and will not play the remaining two days. We will continue to monitor him.”

It was one of a number of powerful strokes from Bumrah, who hit six fours and two sixes during his unbeaten 55 off 57 balls — his maiden first-class half-century easily eclipsing his previous highest score of 16.

India had lost eight wickets for 51 before the tailenders rallied.

India’s two other main contributors where No 3 Shubman Gill (43) and opener Prithvi Shaw, who scored 40 from 29 balls before he was bowled by Will Sutherland.

Sean Abbott took 3-46 for Australia A.

With Kohli sitting out the match, stand-in skipper Ajinkya Rahane won the toss and elected to bat first.

Rahane was caught behind for 4 during a period when India lost three wickets for four runs.

Many of India’s players do not have experience of playing with the pink ball, having played only one Test against Bangladesh under the day-night conditions.

That match at Eden Gardens in Kolkata in January was won by India by an innings and 46 runs.

A Vaccine Is on Its Way to Canada. Who Will Get it First?

German Gymnastics team push back against sexualisation by wearing unitards

By admin
7 mins ago
Sports

Kanye West is living at Mercedes-Benz Stadium in Atlanta

NHL flat cap has caused GMs to get even dumber

German Gymnastics team push back against sexualisation by wearing unitards

Taekwondo Is Path to Medals for Countries That Rarely Get Them